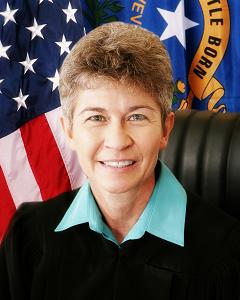 Judge Kimberly A. Wanker was appointed to the Fifth Judicial District Court, Department 1, by Governor Brian Sandoval after the passing of long time District Judge John P. Davis. Judge Wanker, who prefers to be referred to as “Kim” outside of the courtroom, is the first rural female District Judge in Nevada. Kim was raised in Scottsbluff, Nebraska.

Kim began her legal career in 1987 in Colorado, then moved to Nevada in August 1989. Kim worked for the law firm of Gordon and Silver, Ltd. from 1989 until January 1995, when she began her own law firm, Kimberly A. Wanker, Ltd. Kim worked as a sole practitioner until taking the bench on July 1, 2011. From 1995 to 2002, Kim also served as a part-time General Counsel for a construction company, running the company’s self-insured workers’ compensation program. Kim’s private practice focused on the representation of private and public employers in business and employment law and litigation in the states of Nevada and Colorado.

Kim believes in giving back to the community, and is involved in various community organizations and activities. Kim recently was invited to join the Board of Directors for the Nathan Adelson Hospice in Pahrump.